Whenever Russian propaganda gets a reason to spread some information, it adds some details and spreads it in Ukrainian media space in such a way that it will be beneficial to Russia. Serhiy Oliynyk, Head of the Department of Permitting Procedure and Control over Distribution of Publishing Products of The State Committee for Television and Radio-Broadcasting of Ukraine gave an interview to Ukrinform Information Agency on 23rd January 2021. The interview devoted to importing books from Russia and banning some book was real BOOM! With the help of a network of pseudo-experts, Facebook and different kinds of trash media started spreading a fake about banning the books written by “Russian classics” in Ukraine.  Strana.ua internet edition informed its readers on 1st February 2021 that “the following books published in Russia are prohibited for import to Ukraine: The Master and Margarita by Bulgakov, books about Erast Fandorin by Boris Akunin and some others”. We are going to have a close look at this Strana.ua message and analyse why it is just another Kremlin propaganda fake.

MESSAGE 1: The other day, a State Television and Radio official exploded with revelations about the grounds on which he bans books imported from Russia. As it turned out, Ukrainian censors decide at their own discretion which books are propaganda and which are not. So, it is, in fact, forbidden to import in the country Boris Akunin’s books from any publishing houses and some editions of a cult novel of the Kiev Mikhail Bulgakov The Master and Margarita.

Strana.ua also stresses that “the State Committee for Television and Radio Broadcasting also banned all Akunin’s books on Russian history from being imported to Ukraine”. As for two Boris Akunin’s books on Russian history, Serhiy Oliynuk stated that the reason is that “these books share a typically imperial view on history, they are full of different historical myths. Besides, there was a period in Hryhoriy Chkhartishvili’s (Akunin’s real name) work when he used to look at the history of the “prison of the nations” through pink glasses”. 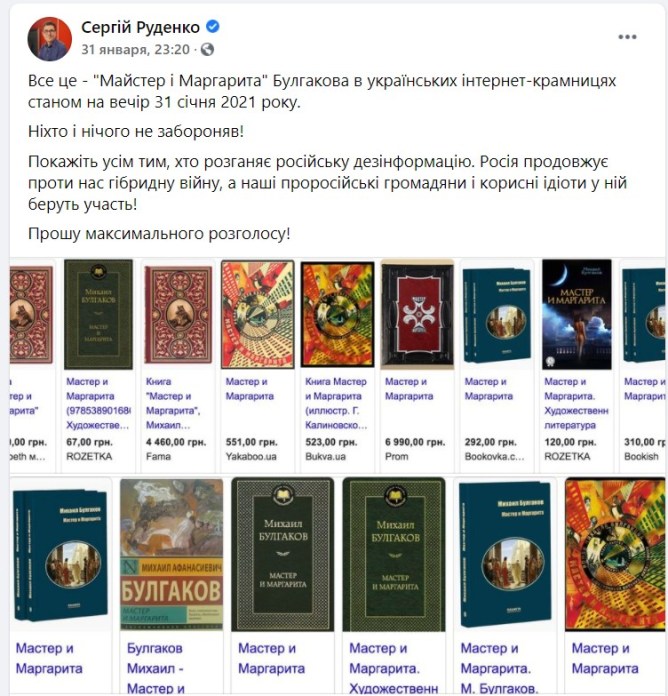 Speaking about the second part of the History of the Russian State series, Borys Akunin states on the site of Snob International Project that “it is fiction. The “historical” volume contains only facts; the “fictional” one – fantasy around these facts. It is not important whether you start with belles-lettres or with the documentary part. Someone will read the stories first and then will decide to learn what is fiction and what is truth there”. Only two volumes on the history of Russia were banned by the State Committee for Television and Radio Broadcasting, while other seven volumes of the series are not banned.

As for the series about Erast Fandorin, Strana.ua claims that “Oliynyk makes decisions about prohibiting a whole literary work (not even its separate editions) on the basis of his own censorship interpretations”. However, Oliynyk expresses his personal opinion about Fandorin and there is no book about Fandorin on the list of the publishing products of the aggressor state. This is why Russian propaganda only encourages public dissatisfaction with the help of fake facts.

MESSAGE 2: “For example, Yelizaveta Dvoretskaya’s book Olha, the Princess of Military Fortune was prohibited from being imported to Ukraine due to its epigraph: About Russia with love. Where in Ukrainian legislation is it said that it is banned to love Russia? Several editions were prohibited from being imported as there were links to publishing houses’ pages on Vkontakte or Yandex (which regulations in the legislation ban this?)”

Oliynyk states that the epigraph About Russia with Love on the cover of the book sounds like teasing Ukrainians especially when our militaries are killed by Russian weapons in the east of our country but Strana.ua thinks that it is not important. Also, according to the Ukrainian law On Amendments to Certain Laws of Ukraine Restricting Access to the Ukrainian Market of Foreign Printed Products of Anti-Ukrainian Content from 08.12.2016, popularization or propaganda of the aggressor state and its authorities, representatives of the authorities of the aggressor state and their actions that create a positive image of the aggressor state, justify or recognize the lawful occupation of the territory of Ukraine is prohibited.

Strana.ua asks in its message about the laws of Ukraine which regulate the prohibition on importing books due to the fact that links to Vkontakte or Yandex pages of the publishing houses are printed on their cover?

Oliynyk states that “The expert council recognized that 18 publications are not subject to import into Ukraine due to the fact that, by placing relevant links on their pages, they encourage readers to use the social network VKontakte and Yandex.ru portal, as well as promote Russian publishers “Exmo” and “AST”. These Internet resources are widely involved in the information war against Ukraine and mercenaries are recruited through them to participate in hostilities against our country in the temporarily occupied territories of the Donbass. In addition, these social networks, portals and publishing houses are subject to sanctions in accordance with the decision of the National Security and Defense Council of Ukraine”. According to the decree of May 15, 2017, the decision of the National Security and Defense Council “On the application of personal special economic and other restrictive measures (sanctions)”. Russian social network Vkontakte, Odnoklassniki, Yandex internet portal and Mail.ru postal service are on the sanctions list. Thus, the ban on the above-mentioned books is directly related to the law through the promotion and propaganda of the aggressor state and violation of the decision to import books to Ukraine by placing links on its pages, which are under sanctions.