In the 70s, when any references to Ukrainian heraldry were tabooed and the trident was a symbol of nationalism for the Communist regime, the symbol of our country was freely used even as an element of sports uniforms. A black and white photo of athletes was posted on Facebook several weeks ago. The author claims that those were players of a Canadian hockey team of 1976.  While Soviet hockey players wore a uniform with USSR abbreviation, Canadian ones appeared on the hockey pitch wearing a uniform with Ukrainian heraldry.

Almost 4 thousand shares mean that Canadians with the coat of arms on their uniform won the hearts of the Ukrainian audience of the social network. Still, even a quick superficial fact-check discovered that the athletes from the photograph have already become heroes on Facebook and Twitter several times, as posts with this picture have been shared on social networks under different titles since 2019. We are about to find out if this story is real! 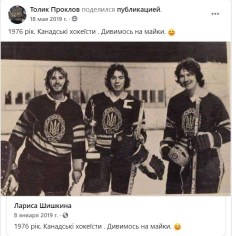 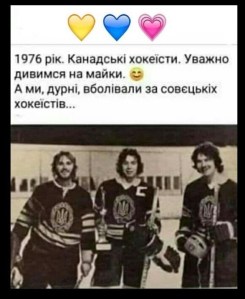 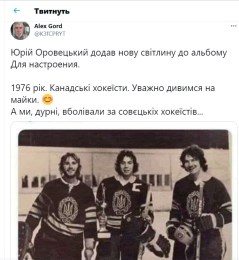 An archive photograph which social network users like so much turned out to be genuine. We managed to find the proofs in the archive of The Svoboda newspaper in the issue which was published on February 26, 1976. The men in the photo are players of a student hockey team which was called the Cossacks. The team was  located in Winnipeg, Canada however, its players did not come from native Canadian families. They were Ukrainians. The team is famous for winning the University League three seasons running in 1974/75, 1975/76 та 1976/77.

Ukrainian-American press wrote about two friendly games between the Cossacks and another Ukrainian students’ team, Chornomorska Sich, which took place in Newark, on 14th and 15th of February 1976. The Cossacks (the guest team) beat the rivals 5:2 and 9:0. Ukrainian heraldry adorned their uniform. This article is actually the only proof of the match as there was no digital media at that time. We were able to find out the names of the members of the team due to the journalists’ material. The surnames of the players prove their Ukrainian origin: Y. Kohut; Nestor Budyk (the goaltender); P. Pyrobyk; M. Davyddovsky; P. Bazan; S. Holovka; Roman Hrabovych (the captain); M. Zatvarnytsky; D. Lage; M. Kuzyk; Z. Romaniuk; B. Tymo; Y. Bercholuk. 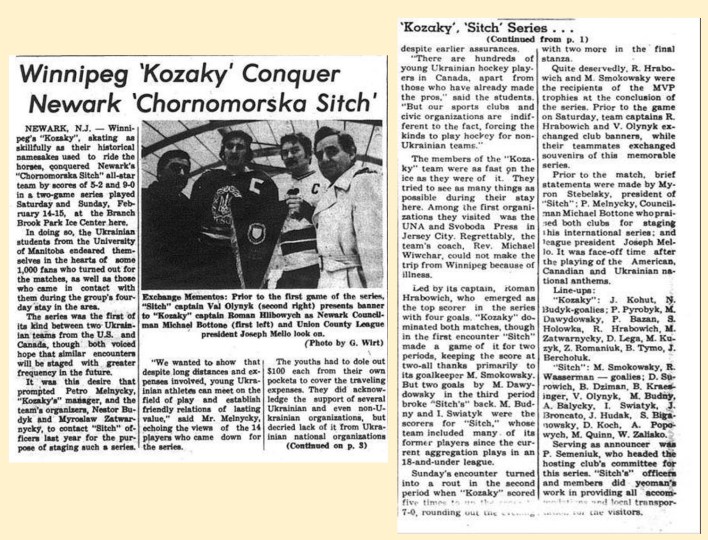 We found some evidence proving that Nestor Budyk, the goaltender of the team, is now an activist of the Ukrainian community in the west. M. Zatvarnytsky, a former player of the team, now represents the Canadian Friends of Hockey in Ukraine (CFHU). It is a union which was created in Winnipeg in 2018 in order to support hockey in Ukraine.

It should be noted that Winnipeg plays one of the most important roles in this story and can explain why the uniforms of the players were adorned with Ukrainian coat of arms. This region has the biggest Ukrainian community. More than 15% of its residents are of Ukrainian origin. There are schools in the city where studying is conducted in the Ukrainian language. And there is a portrait of Shevchenko at the entrance to the Parliament. No wonder, Ukrainian players of a Canadian students’  hockey team chose the name the Cossacks and played in the uniform with a Ukrainian symbol.

However, that was not the only match in the history of Canadian hockey when players of the hockey team wore a uniform with Ukrainian heraldry or ornaments. Another example is the match of Canadian team Dauphi Kings (Dauphin, Canada) when the players wore a uniform which was adorned with Ukrainian vyshyvanka (traditional Ukrainian embroidery) motifs. The match took place on 3rd January 2017, many years later than the triumphant match of the Cossacks. It was a Youth League hockey match called Ukrainian Night. It should be noted that the city of Dauphin is also famous for its powerful Ukrainian community. More than a quarter of its residents speak Ukrainian.