MANIPULATION: Ukraine will be one of the last countries to get the vaccine against coronavirus - Без Брехні
Поділитися
Facebook Twitter WhatsApp Telegram

While coronavirus is spreading around the planet and governments are looking for ways to vaccinate their citizens as soon as possible, an alarming news has appeared in Ukrainian information space: our country will allegedly be the last one to get the vaccine against Сovid-19 and the immunization process will start not earlier than 2023. This conclusion can be made if to look at the global immunization map which has recently been published by a British analytical agency The Economist Intelligence Unit. Facebook users did not doubt the truthfulness of the data published and shared the map on social network.

The map was spread in order to show that Ukraine is sure to lag behind in the vaccination process. The authors hinted that the ruling political party was not doing enough to purchase the vaccine. We decided to find out how reliable the research was abstracting from its political context and discovered that the map could neither be fully trusted, nor fully refuted. Let us see why. 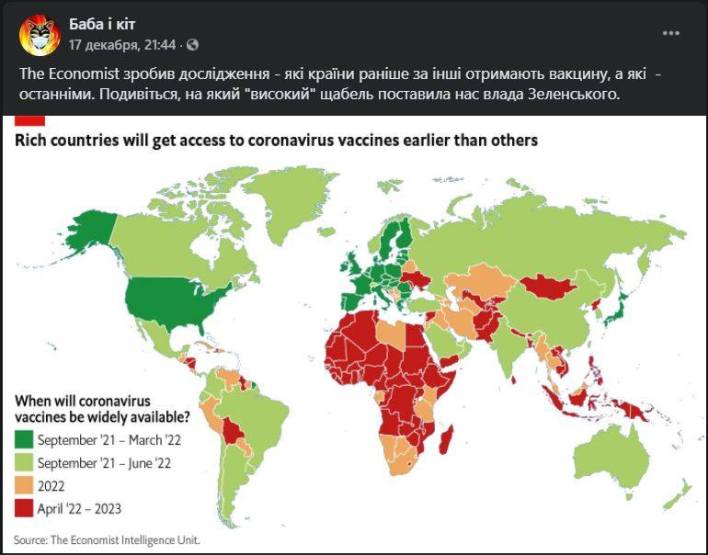 The source of the study on the vaccine countries around the world was the personal Twitter account of Agatha Demare – Director of Global Forecasting of the British analytical company The Economist Intelligence Unit. The map was posted on 11th December.

According to the data published, citizens of the USA, Japan and Europe will be the first ones to get access to the vaccine. It is explained by the fact these countries are the richest ones thus they have more financial opportunities to provide their citizens with the necessary medicine. It should be noted that the map was created according to  the widely available criterion, which can be interpreted as “massively”. It means that the map reflects not the order of purchasing the vaccine by different countries but the opportunity to start massive vaccination. Therefore, theoretically it is possible for Ukraine to obtain the vaccine earlier but it will be available, for example, for the risk groups and after some time for the rest of the citizens.

According to the study, Ukraine is among the countries where massive immunization will start not earlier than 2023. Moldova, almost all African countries, Mongolia, the DPRK, a part of South-East and Central Asia are in the “red zone” with us.

The material pointed out that the vaccine will not be widely distributed in developed economies until mid-2021. The reason for this is complicated logistics and delivery.

Wealthier countries will be the first ones to receive medicine as they are trying to buy it as soon as possible, while countries with lower levels of wealth will seek funding to purchase them. An important clarification is that the map is an assumption of experts on the introduction of the vaccine. However, we did not find a clear methodology and well-defined criteria that analysts used in the study.

That is, the map turned out to be autonomous, not containing additional explanations and with a methodology unknown to the general public.

At the same time, Bloomberg conducted its own study, which confirmed the theory of faster vaccination by richer countries. Wanting to recover as soon as possible from the effects of the pandemic, countries signed agreements to ensure access to vaccines.

According to Bloomberg, 8.30 billion doses have already been prepared. This would be enough to cover more than half of the world’s population (most medicines are designed for two injections) if the vaccines were distributed evenly. Bloomberg tracked contracts for the supply of 9 most promising vaccines in the world. It turned out that the distribution of vaccines is not very fair. Richer countries book far more doses than they need, and poorer countries book too small a percentage of their needs. In particular, Ukraine ordered vaccines for only 5% of the population, which will be enough for 2.1 million people.

By comparison, Canada, which has a population of 38 million, has ordered vaccines for 190 million people. Together with Ukraine, a number of other countries have reserved the number of drugs to provide them to 5% of the population. 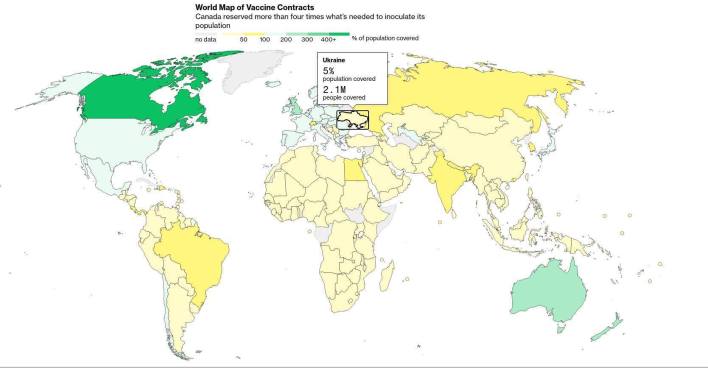 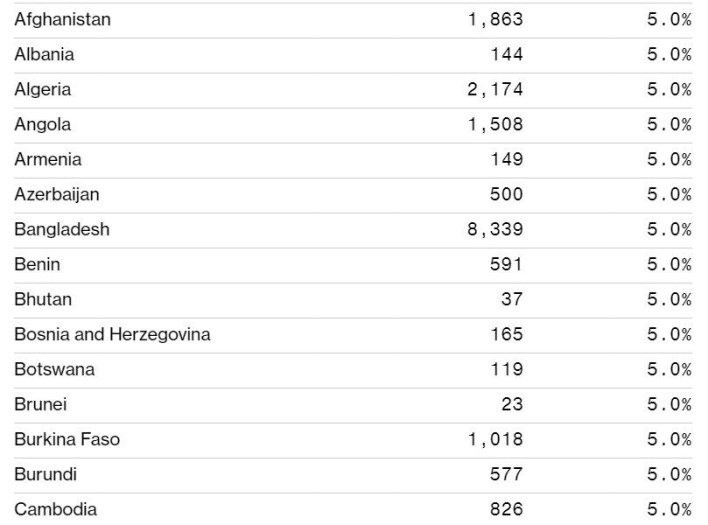 In turn, the Minister of Health of Ukraine Maksym Stepanov announces other figures regarding the purchase of vaccines. According to him, Ukraine will receive 8 million doses of the vaccine in April-June next year. According to the country’s chief sanitary doctor Viktor Lyashko, another 16 million doses of vaccines may be delivered as well. The drugs will be part of the COVAX initiative, which supports access to Covid-19 vaccines for middle- and low-income countries that cannot afford to pay for the vaccines in full. The program is funded by Official Development Assistance, as well as private sector contributions and charity.

Thus, the study referred to by the authors of the post on the social network cannot be considered justified, because the developers of the map themselves claim only the admissibility of such developments.

* In turn, Facebook users used the data for their own purposes, stating that Ukraine would be one of the last to receive the necessary vaccines, without emphasizing that the study implied mass access to vaccines, not the fact of receiving them.

* At the same time, the data provided by Bloomberg turned out to be deeper, they are based on the already existing fact of booked deliveries of vaccines to countries around the world. These data confirm the assumptions of analysts at The Economist Intelligence Unit, so we cannot call their research untrue.